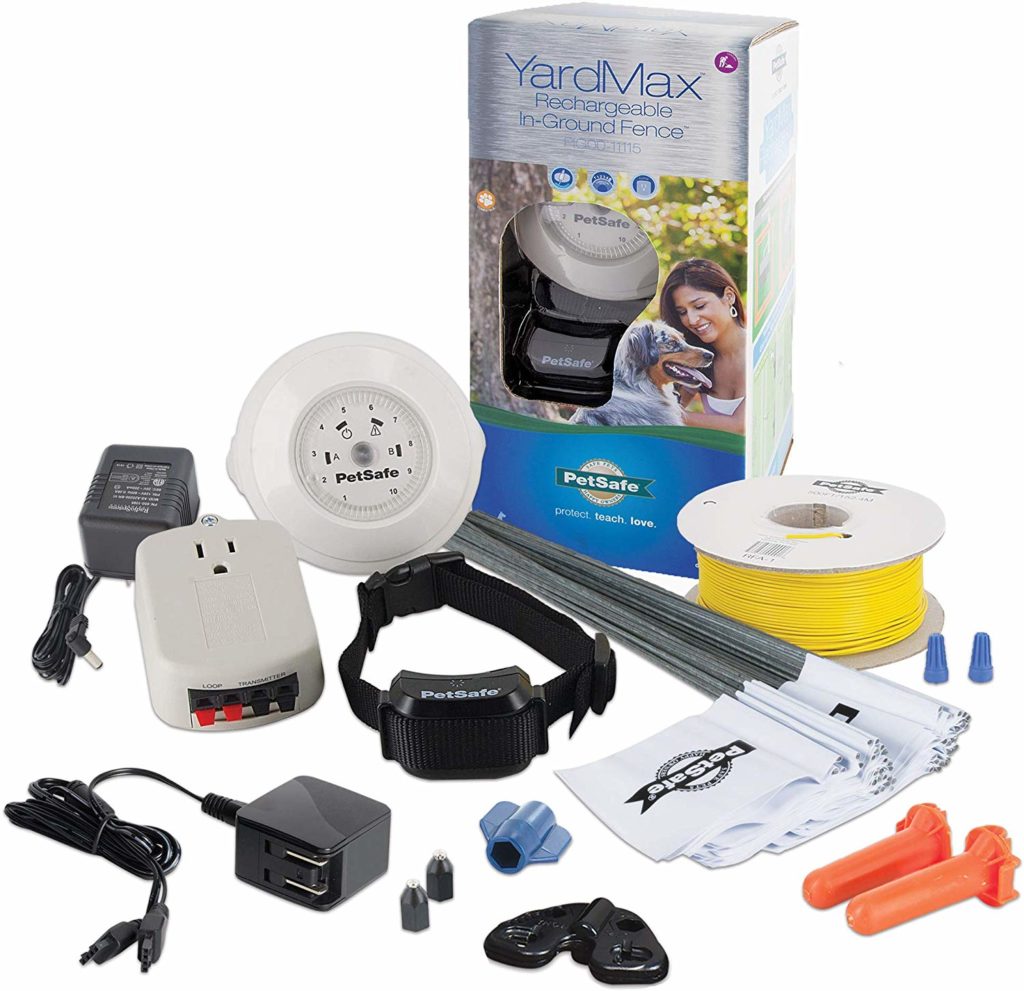 The YardMax invisible fence system by PetSafe will maximize the amount of yard space you have, giving your pet a safe place to freely play. Their latest model is said to be their most reliable yet and is considered to be one the best invisible dog fences on the market. It comes with some great features including a collar that’s rechargeable and a system that’s easy to set up and use.

Our Verdict: This system comes with some great features, including static-free reentry, a low battery life indicator, a rechargeable collar, and training flags that will help you train your dog to learn how to use this new fence system. Set up can be pretty labor-intensive since you’ll have to bury the wires, but it’s a fair tradeoff for a system that’s very reliable and built tough. The included collar can be used for dogs five pounds and up and the system itself is expandable. However, keep in mind that without expansion, the current system can only cover up to 1/3 of an acre, which may be a deal-breaker for pet owners with a lot of land. Overall, I found that the system was easy to use and adjust and offered a more reliable performance compared to competing models.

Overview and Features of YardMax

Like other competing invisible fence systems, this model will come with plenty of wire that you’ll need to bury as part of the installation process. The wire works in conjunction with a transmitter and a receiver collar. The collar will send a warning tone, alerting your dog, should they come within a few feet of the wire that surrounds the perimeter of your property. If your dog fails to turn around, the collar will then send a static correction which will not be painful, but it will startle your pet and cause them to retreat. This collar features a total of five adjustable correction levels.

While the static corrections are not painful, they’re definitely uncomfortable and will startle your dog, causing them to turn around and head back home. The collar works for dogs five pounds and up and fits neck sizes six inches up to twenty-eight inches, making it one of the most versatile collars on the market. The collar is also completely waterproof, so it can handle submersion without getting damaged.

You’ll set the range of the collar on the transmitter, which will detect where your pet is and how close they are to the perimeter of your yard. Once your pet comes within a few feet of the wire, the pet will receive a static correction.

This collar is battery-powered, like most collars that come with invisible fence systems. However, unlike the competition, this battery is rechargeable. The collar will need to be recharged every three weeks or so, depending on how often your dog sets off the static correction feature. The built-in low battery life indicator will flash red to alert you that the collar needs to be recharged. Fortunately, the collar has a short charging time of two hours, so you can recharge it while your dog is sleeping.

This set comes with training flags, which will be used as a visual training tool that will help your dog learn how to adjust to the new system. The flags should be placed directly above the wire, around the perimeter of your home. Most pet owners will set the collar to the tone warning only during training, but you’ll have the option to use a tone plus static correction if needed. During this time, your dog will make the connection between the flags and the tone/static correction, and learn that there is a boundary they cannot pass if they want to avoid setting off the static correction.

The amount of time it will take to train your dog can depend on the dog itself and how stubborn he or she is and how responsive. Most pet owners have stated that they can easily train their dogs to use the system within a week. Over the course of a few days, you can slowly begin to take away the flags until none are left. By this time, your dog will remember where the boundary lines are and will not cross them.

One of the biggest flaws of competing systems is the fact that they will send an additional static correction once your pet has escaped the yard and is attempting to get back on your property. As you can probably guess, some dogs will not return to the yard in fear of this additional static correction. But this manufacturer has thought of everything, which is why they’ve included a static-free reentry, which means the collar will not send out another correction once your dog returns to your property. This is an excellent feature that unfortunately, many other systems don’t have.

This system will cover up to 1/3 of an acre. However, if you have a larger property, this set can be expanded with the purchase of an additional set. It can also be used with an unlimited number of collars, so, if you own more than one dog, you can purchase additional collars directly from the manufacturer, that can be used with a single transmitter.

The set up process is one that most pet owners will dread. But before you get started digging, you’ll first need to do a dry run. This will help you to determine the boundaries you want the fence to cover and which areas you want to keep your pet out of, such as the garden, pond, or even an area that you’re trying to grow grass or flowers. Once you have your wire set up, you’ll hook up the transmitter and turn the collar on, just to ensure the system is working correctly.

Next, you’ll place the training flags along the perimeter so you can get started on teaching your dog how to use the new fence system.

The competing system is by the same manufacturer, but it doesn’t offer the same variety of bells and whistles that some pet owners are looking for. In the competing set, the PetSafe Basic System’s collar is not rechargeable, although it does have a battery life of two months. Instead of five static correction levels if offers four, not counting the tone alert. It can be used for dogs eight pounds and up, so it’s not recommended for smaller breeds. Additionally, the collars feature a low battery life indicator, which will alert owners that the batteries need to be changed out. It doesn’t offer the static-free reentry and covers 1/3 of an acre, just like the YardMax set, however, it’s available for a fraction of the price, so it’s a better option for the dog owner on a tight budget.

The PetSafe invisible fence system comes with a rechargeable collar, which is a huge plus for any pet owner, a powerful transmitter, and a static-free reentry that encourages your dog to come back home. This system comes with everything you need to train your pet to learn how to use the new system and also features some great built-in safety features that will ensure your system remains in perfect working order. I gave this set a rating of four and a half out of five stars.

Any cookies that may not be particularly necessary for the website to function and is used specifically to collect user personal data via analytics, ads, other embedded contents are termed as non-necessary cookies. It is mandatory to procure user consent prior to running these cookies on your website.